why Rex Grossman should be benched 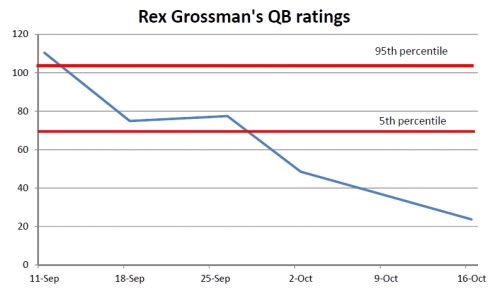 Of course, the QB ratings “is a complex. nonsensical formula that combines a QB’s completion percentage, Yard per Pass Attempt, TD Pass Percentage, and Interception Percentage into a single incomphrensible number.” Grossman was ranked third worst with Wayne Winston’s formula and fifth worst with the “wages of win” ranking. But with only five games under his belt, it is possible that a bad couple of games are unfairly weighing down Grossman’s stats, but I wouldn’t bet on it.

Who is the best? Aaron Rodgers (much to my dismay as a Bears fan!)  Jay Cutler and the Chicago Bears appear to be average this year.

This entry was posted on Tuesday, October 18th, 2011 at 8:53 am and tagged with sports and posted in Uncategorized. You can follow any responses to this entry through the RSS 2.0 feed.
« A new Punk Rock OR Podcast episode is available
should Rex Grossman be given another shot? »

4 responses to “why Rex Grossman should be benched”