should Rex Grossman be given another shot?

My post yesterday made a case for why Rex Grossman, QB of the Washington Redskins, should be benched his performances became worse and worse. However, not all of the pundits agreed with me. ESPN’s Michael Wilbon made a case for Rex Grossman. Wilbon argued for giving Rex another shot based on Rex Grossman’s bipolar performances with the Chicago Bears. After all, isn’t Rex due for another good game?If he’s given another shot, he may regress to the mean.

I decided to test the hypothesis that the possibility of “Good Rex” games would warrant giving Rex Grossman another shot. Here’s what I did.

I computed Rex Grossman’s QB rating if he continues to start, with each of his games yielding numbers equal to those in his first game of the season (a “Good Rex” game — see yesterday’s visual).  Therefore, additional games would let “Good Rex” dilute the “Bad Rex” performances. I assume that Bad Rex will not return in the future (a big if), which means that this is a best case scenario.  The results are illustrated below. The current 5th and 95th percentiles for QB rating are shown for reference.

Rex’s current QB rating is shown as the point with an x-axis value of zero additional games with Good Rex.  With one more good game, Rex ‘s QB rating becomes almost acceptable (his rank would be 29th instead of 31st). Two good games would improve Rex’s QB rating rank to 23rd in the league.  With four good games, his QB rating would be ranked in the top half of the league. If Rex consistently have good games, his stats would become respectable rather quickly.

Washington coach Mike Shanahan announced that Rex Grossman will not start on Sunday, so we won’t know if Rex just had a couple of bad games and regresses to the mean. What’s your take? 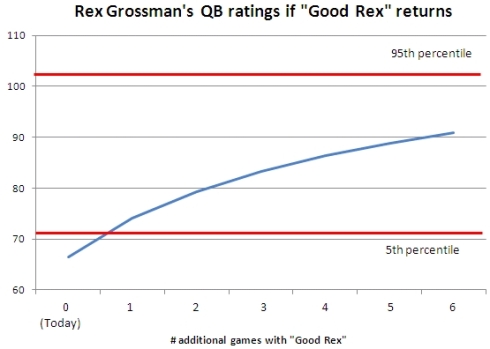 This entry was posted on Wednesday, October 19th, 2011 at 11:25 am and tagged with sports and posted in Uncategorized. You can follow any responses to this entry through the RSS 2.0 feed.
« why Rex Grossman should be benched
on pirates and operations research »

One response to “should Rex Grossman be given another shot?”