Yesterday, Peter K. requested that I put the US driving safety statistics in an international perspective. Here are four figures on this topic.

The driving fatality rates in the EU by region. These rates include fatalities caused by driving, and therefore, pedestrians killed by cars are included. “The total road death toll was cut by 48 % between 1991 and 2008 and has fallen by 31 % since the year 2000.” Eastern Europe looks kinda dangerous here, and Italy doesn’t live up to its dangerous driving reputation.

Here are the traffic fatalities per 100K inhabitants. Only about half of the people who died were in cars, although I suspect that less developed countries contributed to more pedestrian deaths.

Here are the traffic fatalities per 100M miles driven. The last figure didn’t normalize the fatalities according to how much people drive in different countries. This figure, on the other hand, better reflects how good the drivers are in different countries. However, countries with high speed limits (think of the Autobahn) may fare a little worse, since accidents at high speeds tend more be more deadly. Again, half of the victims were not in cars. Therefore, you might not want to be a pedestrian in UAE. 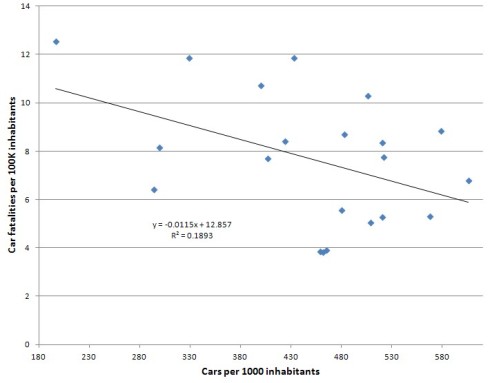 This is my favorite figure. Here I tested whether people who drove more got more practice, and therefore, led to safer driving conditions in their countries, a possible upside to driving a lot [link to data from the EU countries]. The x-axis shows the number of cars per 1000 inhabitants, a proxy for how much people drove (This isn’t perfect, but I couldn’t find the actual number of miles driven). The y-axis has per capita car fatality rates (per 100K). There is certainly a negative relationship here, with more cars associated with fewer fatalities. However, this only explains ~19% of the variation.

This entry was posted on Thursday, July 26th, 2012 at 2:58 pm and tagged with traffic, Transportation and posted in Uncategorized. You can follow any responses to this entry through the RSS 2.0 feed.
« five charts about Americans and their cars
Are you looking forward to the Olympics? »