eradicating polio through vaccination and with analytics

The most recent issue of Interfaces (Jan-Feb 2015, 45(1)) has an article about eradicating polio published by Kimberly M. Thompson, Radboud J. Duintjer Tebbens, Mark A. Pallansch, Steven G.F. Wassilak, and Stephen L. Cochi from Kid Risk, Inc., and the U.S. Centers for Disease Control and Prevention (CDC). This paper develops and applies a few analytics models to inform policy questions regarding the eradication of polioviruses (polio) [Link to paper].

The article is timely given that vaccination is in the news again. At least this time, the news is fueled by outrage over GOP Presidential contenders Chris Christie and Rand Paul’s belief that parents should have the choice to vaccinate their children [example here].

Polio has essentially been eradicated in the United States, but polio has not been eradicated in the developing world. The Global Polio Eradication Initiative (GPEI) helped to reduce the number of paralytic polio cases from 350,000 in 1988 to 2,000 in 2001. This enormous reduction has mainly been achieved through vaccination. There are two types of vaccines: the live oral vaccine and the inactivated vaccine (IPV). Those who have been vaccinated have lifelong protection but can participate in polio transmission.

The paper summarizes a research collaboration that occurred over a decade and was driven by three questions asked by global policy leaders:

The paper is written at a fairly high level, since it summarizes about a decade of research that has been published in several papers. They ended up using quite a few methodologies to answer quite a few questions, not just about routine immunization. Here is a snippet from the abstract (emphasis mine):

Over the last decade, the collaboration innovatively combined numerous operations research and management science tools, including simulation, decision and risk analysis, system dynamics, and optimization to help policy makers understand and quantify the implications of their choices. These integrated modeling efforts helped motivate faster responses to polio outbreaks, leading to a global resolution and significantly reduced response time and outbreak sizes. Insights from the models also underpinned a 192-country resolution to coordinate global cessation of the use of one of the two vaccines after wild poliovirus eradication (i.e., allowing continued use of the other vaccine as desired). Finally, the model results helped us to make the economic case for a continued commitment to polio eradication by quantifying the value of prevention and showing the health and economic outcomes associated with the alternatives. The work helped to raise the billions of dollars needed to support polio eradication.

The following figure from the paper summarizes some of the problems addressed by the research team. The problems involved everything from stockpiling vaccines, to administering vaccines for routine immunization and to containing outbreaks: 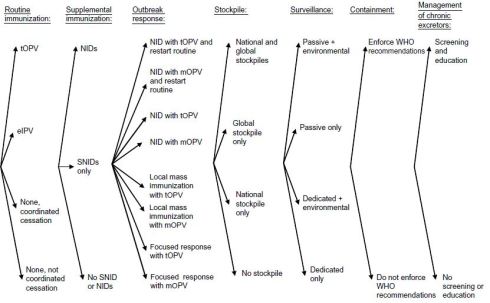 I wanted to include one of the research figures used in the paper that helped guide policy and obtain funding. The figure (see below) is pretty interesting. It shows the costs, in terms of dollars ($) and paralytic polio cases associated with two strategies over a 20 year horizon: (1) intense vaccination until eradication or (2) intense vaccination but only until it’s “cost effective” (routine immunization). The simulation results show that the cumulative costs (in dollars or lives affected) are much, much lower over a 20 year time horizon if they adopt a the vaccination until eradication strategy. This helped to make a big splash. From the paper:

In a press release related to this analysis, Dr. Tachi Yamada, then president of the Bill & Melinda Gates Foundation’s
Global Health Programs stated: “This study presents a clear case for fully and immediately funding global polio eradication, and ensuring that children everywhere, rich and poor, are protected from this devastating disease.” In 2011, Bill and Melinda Gates made polio eradication the highest priority for their foundation

In full disclosure, I’m a big fan of immunization. All of my children are fully vaccinated. My grandmother was born in 1906 and used to tell stories about relatives, so many of whom ultimately died of infectious diseases (Grandma lived until she was ~102!). I’m glad my kids don’t have to worry about getting many of these diseases. I’m also proud to contribute to herd immunity.  We come in contact with people who have compromised immune systems or could not get immunized, and I’m glad we’re playing our part in keeping everyone else healthy. Part of the reason why vaccination is challenging is because social networks play a critical role in disease transmission. Even if enough people have been vaccinated in aggregate to obtain herd immunity in theory, it may not be enough if there are hot spots of unvaccinated children who can cause outbreaks. There are hot spots in some areas in California and other states that have generous exemption policies.

This entry was posted on Thursday, February 5th, 2015 at 9:38 am and tagged with analytics, health and posted in Uncategorized. You can follow any responses to this entry through the RSS 2.0 feed.
« rare events: there is an app for that
it’s possible that we have both record levels of immunization & record levels of vulnerability to infectious disease: why social networks matter »

2 responses to “eradicating polio through vaccination and with analytics”