There is a lot of bad information out there about the Powerball (now $1.5B!).

Q: Should I play the lottery?
A: Maybe. You have the same probability of winning (1 in 292 million) any time you play. What is different is the payout. If you must play, play when there is a big payout. You have more competitors when the jackpot is high, but winning is relatively rare and you are still more likely to walk away with more winnings when the jackpot is high (even if you have to share the jackpot with others). You can win $1M if you get the first 5 numbers right, but keep in mind that the $1M does not increase if the jackpot gets bigger.

Bottom line: if you never play the lottery, this is a good time to buy a ticket.

Q: I’ve read that I should buy tickets Pennsylvania. Is Pennsylvania lucky?
A: No. Each ticket is equally likely to win regardless of where it was sold. There are some tax implications based on where you live and where you purchased your tickets. Don’t buy a ticket in New York if you don’t live there or you will have to pay New York income tax if you win.

If 600M tickets are purchased, then there is a 87% someone will win.

If 700M tickets are purchased, then there is a 91% someone will win.

If 900M tickets are purchased, then there is a 95% someone will win.

If 1B tickets are purchased, then there is a 97% someone will win.

So while it’s likely that someone will win, there is still a good chance the jackpot will roll over again.

Q: I read that 70% of winning tickets have been computer generated. Does this mean that I’m less likely to win if I pick my own numbers.
A: First of all, if 70% tickets sold are computer generated, then this a meaningless statement. Each ticket is equally likely to win, regardless of how the numbers were picked.

Q: Do you recommend picking the same numbers every time?
A: That doesn’t matter. Each combination of numbers is equally likely to win.

Q: An ABC News analysis of past Powerball winners suggests that 8, 54, 14, 39 and 13 have been drawn the most frequently. Should I select these numbers?
A: Not necessarily. Each combination of numbers is equally likely to win. Of course over time some numbers are drawn more than others because that is what true randomness looks like. However, the picks in the past give no insight into which numbers will be drawn next.

Q: A lottery expert said: “The only advice I can really give people is buy as many tickets as you can afford.”
A: While it’s true that your odds are winning strictly go up with each additional ticket you purchase, in general buying lottery tickets is not a good investment. I’d recommend investing in mutual funds or education, or saving for retirement or a rainy day over playing the lottery.

Q: What is the cash lump sum payout associated with the Powerball?  If I win, should I choose the lump sum payout or the annuitized prize paid over 29 years?
A: The lump sum payout is about $806M (now $903M). The $1.3B (now $1.5B) payout is paid out over 29 years (the first payment is immediate). The tax situation is similar for these two options, so I would recommend the annuitized prize. In either case, you would be in the highest income tax bracket (39.6% for Federal and 7.65% in Wisconsin). This means that you’d come out with about half of your winnings. If you take the lump sum, on average you’d come out $0.54 behind for each $2 ticket you purchase if you live in Wisconsin. And that is an optimistic number since you will probably have to share the prize. So it’s not a good investment. The annuitized payment is a better deal, although the future earnings you would collect will be worth less than the money now.

There are some weird lottery tax rules according to which state you lived in or bought your ticket (see Forbes for more). An article on Arizona Central summarizes financial advice and personal happiness levels after winning the lottery. Spoiler: winning the lottery probably won’t make you happier.

Q: Will you be playing the Powerball?
A: No 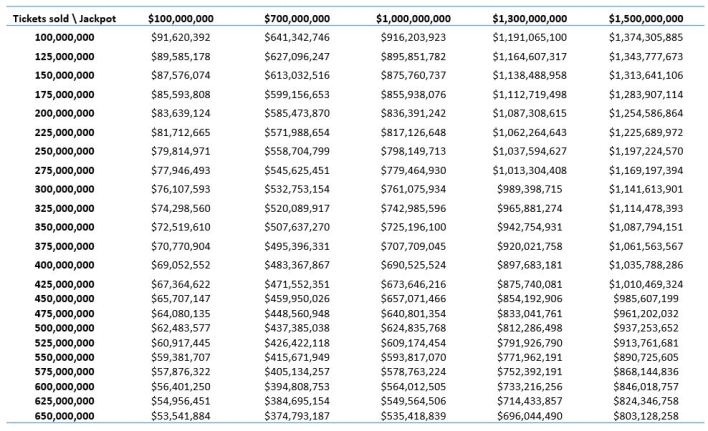 Your expected lottery winnings conditioned on you winning.

This entry was posted on Monday, January 11th, 2016 at 10:15 am and tagged with lottery and posted in Uncategorized. You can follow any responses to this entry through the RSS 2.0 feed.
« Punk Rock OR was on the Advanced Football Analytics podcast
Powerball coverage »