I had fun the last couple of days doing media coverage for Powerball. Here is a roundup of the coverage, mostly for my records.

Guest on “Live at Four” WISC-TV (CBS affiliate in Madison, WI) to talk about Powerball, January 13, 2016 (pictures are below).

Guest on “Central Time” on Wisconsin Public Radio in Madison, WI to talk about Powerball, January 13. 2016. 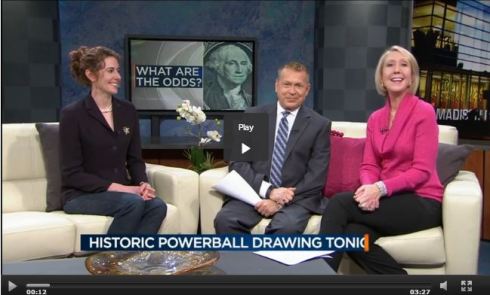 Here is my #Powerball segment on the @WISCTV_News3 new yesterday. It was as fun as it looked! https://t.co/1Oyecdiejn

Thanks to @centraltimewpr on @WPR for talking #Powerball with me. First lottery interview where I've gotten to talk about science & #orms 🙂

As much fun as I've had talking about #Powerball odds this week, I'm glad someone won so I can return to my usual routine 🙂

This entry was posted on Thursday, January 14th, 2016 at 11:06 am and tagged with lottery and posted in Uncategorized. You can follow any responses to this entry through the RSS 2.0 feed.
« Powerball FAQ
Punk Rock OR is on the Relatively Prime podcast »