being algorithms driven vs. being value driven

This was my first year seeing the Edelman award competition and my first time at the Analytics meeting.

The purpose of INFORMS is to advance the science and practice of quantitative decision-making via operations research and analytics. The story of operations research and INFORMS is perhaps best told through the Edelman award competition. The competition is about solving a problem from beginning to end, from inception to implementation and to impact.

Disclaimer: I am an academic. The story of operations research I usually tell is about the development and/or application of methods rather than the implementation of the methods in real-world settings. We don’t develop new analytical methods because math is fun, we are developing methods because we need to solve real problems. Seeing projects that have been wildly successful has been really exciting. There is a difference between being algorithms driven and being value driven. The Edelman award finalists are value driven projects that have pumped hundreds of millions of dollars into the economy. The Edelman competition is an important part of our story as operations researchers where we can tell how we used advanced analytical methods to solve a problem and to create a lasting impact within an organization and the world. 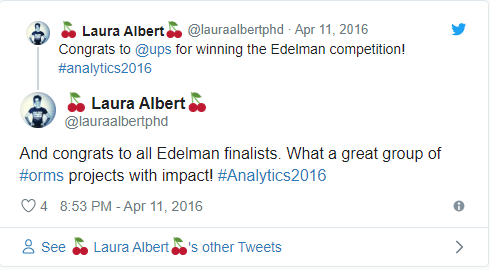 All finalists were amazing! I particularly liked how two finalists showcased how OR and analytics can be valuable in non-traditional areas like finance and marketing (in addition to the traditional application areas of transportation, policing, scheduling, and military logistics). One of the projects (Army) was not data driven, but instead, solicited subject matter experts for probabilities used in a tool that helped soldiers diagnose and repair critical equipment in remote areas such as Afghanistan. There really is no template for a successful project — there are many ways to make a huge impact. Having said that, optimization is particularly useful.

The six finalists for the 2016 Franz Edelman Award competition are:

The UPS Orion project is based on a sophisticated algorithm that automatically plots the course of more than 30,000 UPS drivers every day, which will increase to 55,000 drivers in 2016.

Because ORION provides an optimized delivery sequence that meets multiple operational constraints, the drivers are relieved of the complexity of determining how to make their deliveries.

See the UPS press release on their winning project here.

BNY Mellon is a leader in the tri-party repo market with approximately $2.2 trillion serviced globally, which includes $1.3 trillion or 85% of the U.S. tri-party repo market. In response to the 2008 financial crisis, BNY Mellon worked closely with its clients, their investors, and other market participants to meet the recommendations of the U.S. Tri-Party Repo Infrastructure Reform Task Force sponsored by the Federal Reserve Bank of New York.

In August 2012, Karen Peetz, BNY Mellon President, spoke before the U.S. Senate Subcommittee on Securities, Insurance, and Investment about the U.S. tri-party repo market and this initiative to practically eliminate intraday credit risk, defined as a 90% reduction. BNY Mellon has exceeded the 90% goal to reduce secured credit extended in the tri-party repo market as $1.44 trillion risk reduction has been achieved, or 97%.

Over the last 11 years, operations research techniques have been applied to schedule professional soccer leagues in Chile. These techniques have yielded a direct economic impact of more than USD 55 million through a combination of increased ticket sales, cost savings, and subscriber growth for Chile’s soccer television channel and cost reductions for the teams due to the better travel schedules resulting from an improved ordering of home and away games.

These techniques have also been used to schedule the South American 2018 FIFA World Cup qualifiers.

The Domain Awareness System (DAS) is a network of sensors, databases, devices, software, and infrastructure that delivers tailored information and analytics to the field and to precinct desktops enabling police officers to make more informed decisions. Originally designed for counterterrorism purposes, the DAS has been modified for general policing and is now deployed across every police precinct in the five boroughs, and will shortly be on all 36,000 officers’ smartphones and all 2,000 police vehicle tablets. No other police department in the world shares information and delivers analysis to its officers as effectively.

Prior to the NYPD’s adoption of the DAS, much of the Department’s information was only available to officers in the precinct house with permission to access standalone siloed software applications. For example, only the domestic violence specialist had access to the database of domestic violence records, and only when sitting at his or her desk. Officers who responded to a 911 call for domestic violence were dispatched by radio knowing only the address and the nature of the complaint. They were forced to manage each situation, literally making life and death decisions, without any historical context (such as prior complaints). This situation was not limited to domestic violence incidents – as a whole, the NYPD’s decision making was hampered by a failure to take full advantage of the information at hand, and the service we provided to the public suffered as a result.

The NYPD is now more effectively using its data to inform decisions at all levels of the Department, allowing it to better serve the City of New York.

The Digital Nervous System has resulted in $250 million in cost savings and $1 billion in revenue generation for the company’s paid search clients.

Soldiers in Afghanistan are required to operate and maintain complex electronic weapon systems with minimal resources in combat conditions. The inherent logistics challenges of the Combat Outpost (COP) environment make it difficult to provide timely assistance with support personnel.

Research on the life cycle of COP equipment problems shows that early misdiagnoses can initiate a chain of events that can create lengthy system outages and put lives in jeopardy. CECOM has developed and implemented the CECOM Equipment Diagnostic Analysis Tool, Virtual Logistics Assistance Representative (CEDAT VLAR) to directly address the onsite needs of soldiers in Afghanistan by mitigating knowledge gaps in the COP environment.

This has resulted in tens of millions of dollars in cost savings, increased maintenance efficiency, reductions in troubleshooting time, and No Evidence of Failure (NEOF) component returns have been reduced to zero over the last 18 months.

This entry was posted on Wednesday, April 27th, 2016 at 10:15 am and posted in Uncategorized. You can follow any responses to this entry through the RSS 2.0 feed.
« What I do for diversity and inclusion in the classroom
True Grit: telling our stORy »