This week is National Emergency Medical Services Week. I’ve published and spoken extensively about my research on emergency medical services.

Some blog posts about EMS include:

I am presenting at the AAAS Annual meeting in a session entitled “Translating Engineering and Operations Analyses into Effective Homeland Security Policy” with Sheldon Jacobson and Gerald Brown:

In my talk, I will discuss three research questions I have advanced:

My slides are below.

I gave the opening keynote at the 4th International Workshop on Planning of Emergency Services on June 19-20 in the Netherlands at TU Delft. The workshop was organized by Karen Aardal, Theresia van Essen, Pieter van den Berg, and Rob van der Mei. The workshop was a nice way for researchers and practitioners from several countries in Europe to discuss ideas in emergency service planning. Talks were about emergency medical services, defibrillators, and disaster response. The slides from my keynote are posted below. I enjoyed the other keynote given by Jo Røislien, who talked about optimizing air ambulance base locations in Norway and the politics of addressing the policy issues in Norway.

My hosts ensured I enjoyed my time in Delft. Delft is a wonderful place to visit. I took a few pictures from my trip and posted them below.

The 4th International Workshop on Planning of Emergency Services is off to a good start in Delft 🙂 pic.twitter.com/Kw2aJPCb9J

I'm in Delft in the Netherlands for the Planning of Emergency
Services workshop 🇳🇱 pic.twitter.com/xodmMPY1Fk

If you come to the emergency services workshop in Delft from the east, you can travel on the Oostpoort drawbridge pic.twitter.com/0OvqAeWOVc

Dessert #cheese in the #netherlands #yum

‪The world's most adorable street sign is this wiener dog street sign in the Netherlands, which urges pedestrians & cyclists to take the safe route in a construction zone <3‬ Can we get these in the US?? #prettyplease #wienerdog #safety #netherlands #europe

the logistics of the post-Sandy New York Marathon

I’m pleased to hear that NYC marathon will be held on Sunday as planned.

The logistics will be challenging. The race organizers were expecting 50,000 runners before Hurricane Sandy hit. While many runners may sit out, I expect that most will try to run. After all, the hurricane hit well into the tapering phase of training, meaning that runners should be ready to run,even if they’ve been dealing with hurricane-related challenges. And most of the out of town runners will be relatively unaffected by the hurricane and should similarly be ready to run.

The main challenges as I see it will be to:

#1 Get runners into the city

In huge marathons like this one, many of the runners will not be nearby. Last year, 20,000 of the runners came from overseas. The main ways to get to NYC are by plane and train. As of now, Amtrak still has not resumed NYC travel. They plan to partially restore travel on Friday. There have been a large number of flight cancellations, but flights are being restored and it appears that runners are making it to New York.

Runners from out of town also need hotels. Surprisingly, the lack of hotel rooms seems to be a larger problem for runners than transportation to NYC. The hotels are packed:

The city’s hotels are coping with a list of issues. Among them: Unprecedented cancellations and requests to extend stays; a high number of walk-in room requests from powerless local residents; unpredictable staffing levels; non-working land lines, and in some cases no steam heat.

The Pittsburgh Steelers likewise had problems finding a hotel to accomodate the team on Saturday night before their road game against the New York Giants. The Steelers are flying to Newark for their game Sunday morning.

#2 Get runners and volunteers to the race

Once in/near the city, all 50,000 runners and a few thousand volunteers need to get to the beginning of the race more or less at the same time. Driving to the beginning of a big race like this is generally not the best way to get there. The NYC marathon normally starts on Staten Island, which harder to get to than most races. In the past, half of the runners take the subway in combination the Staten Island ferry to the beginning of the race. Not so this year. The Staten Island ferry has been cancelled and buses will instead transport the runners from a meeting point to the race in four waves at 4:30am, 5:30am, 6:30am, and 7:30am. There shouldn’t be a lot of traffic at 4:30am on Sunday morning, so I would anticipate that the runners should be OK as long as they can take other forms of public transportation to get to the meeting point for the race buses.

Distribute race supplies such as water, Powerade, and portable bathrooms

Normally, setting up portable bathrooms and water/Powerade stations is not a complicated matter. With the number of road closures, etc., it will be more difficult to obtain the necessary marathon resources and get them where they need to be. Races need a huge number of bathrooms because all runners need to go to the bathroom at the same time (right before the race). I wasn’t sure that many portable bathrooms would be available, and it sounds like 1750 bathrooms are at the start of the race. I wrote about bathrooms before [Link]. That sounds like a lot of bathrooms per runner, but I can assure you, there will still be long lines.

In sum, I am amazed that the marathon will continue more or less as planned. I am surprised, however, that hotels may be the biggest challenge. I am also concerned about snafus with public transportation, since runners will rely on public transportation in new ways this time. I hope everything goes smoothly.

What are other issues, bottlenecks, and shortages do you foresee?

the forecasting models behind the power outages forecasts for Hurricane Sandy

I’m thrilled to have interviewed Seth Guikema about his forecasting models for hurricane power outages between his gigs on Good Morning America and Bloomberg. Seth is a professor at Johns Hopkins University, and he is the rock star of hurricane power outage forecasts. I wrote about a Baltimore Sun article about his research not too long ago. On the podcast, he and I chat about the methodologies he uses in his models as well as how news sources like to turn scientific research into digestible sound bites.

Listen here: (or go directly to the mp3 here)

You can listen to the episode below or you can go to the podcast web page (where you can download to iTunes, etc.) and feed. I recommend subscribing to the feed or going directly to the Punk Rock OR Podcast iTunes page, but you can also find the podcast episodes on this blog by clicking on “Podcast” under “Categories” in the left column.

Seth’s models have gotten a lot of coverage. Here are a few places where you can see Seth’s work translated for a general lay audience: 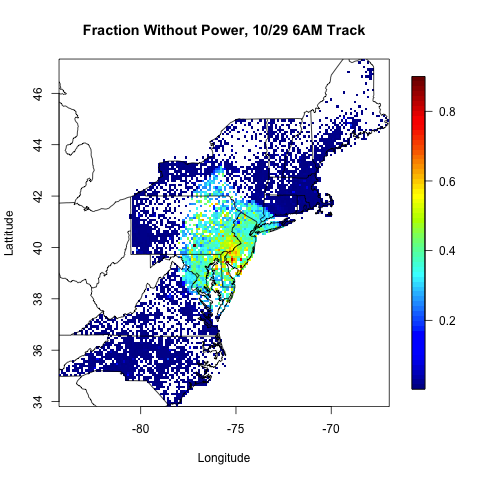