When should a football team attempt a two point conversion instead of an extra point? A dynamic programming approach.

On Sunday November 10, 2019, the Carolina Panthers were down 14 against the Packers early in the 4th quarter. They scored a touchdown, putting them down by 8, and they went for a two point conversion.  The two point conversion did not succeed. This has been the subject of debate, with journalists both applauding and criticizing the decision.

I created a dynamic programming model to determine whether or not to go for a 2 point conversion. The dynamic programming model is based on Wayne Winston’s book Mathletics, which is a fantastic introduction to sports analytics. The state captures the team with possession, the score differential when they obtain possession, and the number of remaining possessions. When there is one remaining possession, it is the last possession. When there are three remaining possessions, the team with the possession has two scoring attempts. Each possession ends in a touchdown, a field goal, or no score. I assume half of all games end in a tie. The probabilities I used are based on average team statistics. I do not model other decisions, such as whether to go for it on fourth down, although these could further improve a team’s win probability.

The slides are below.

Bottom line: teams should go for two points when they score a touchdown and they are down 10, 8, 3, or 2 or up by 1, 2, 4, or 5 (including the points from scoring the touchdown) near the end of the game. These conclusions hold when there are at least two additional possessions in the game.

Carolina went for two when down by 8 after scoring a touchdown. According to my math, Carolina made the right choice. However, the best strategy does not guarantee a win nor does it drastically improve the win probability.

We can examine the decision in more detail. When down by 8 with four possessions to go (which matches up with when Carolina went for a two point conversion), a team has one of two choices:

There are four things to keep in mind:

My conclusions are summarized in the chart below. For more reading: Benjamin Morris of 538 wrote an article about when to go for two here. My analysis is consistent with his, although we make different comparisons. 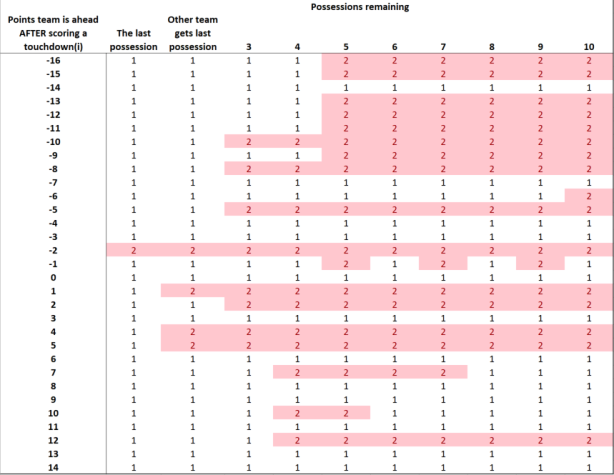 When to go for a two point conversion in NFL football

This entry was posted on Friday, November 15th, 2019 at 12:31 pm and tagged with sports and posted in Uncategorized. You can follow any responses to this entry through the RSS 2.0 feed.
« data science isn’t just data wrangling and data analysis: on understanding your data
Punk Rock OR: A decade in review »

3 responses to “When should a football team attempt a two point conversion instead of an extra point? A dynamic programming approach.”